Terrence has been playing drums from the age of 2yrs old to the present. He got some training in High school playing in a marching band. (R. O. T. C.). His career path led to working with great artists from gospel, jazz, blues, etc. He is a well-traveled drummer. He has played in such places as Paris, Rome, Budapest and Sidney Australia.

Among the artists he has worked with are the Chi-Lites, Mrs. Albertina Walker, Mr. Jesse Dixon, Rev. Clay Evans, and Marshall Thompson, just to name a few. He has worked with Mississippi Heat for the past few years when Kenny “Beedy Eyes” Smith cannot make a date.

As Pierre recently wrote to a promoter: “Terrence is an awesome drummer. He often travels overseas and to Canada with us. Terrence is a drummer who listens to the ensemble, and never overstates his contribution. A true and natural team player on and off the band stand. A joy to have around. ” 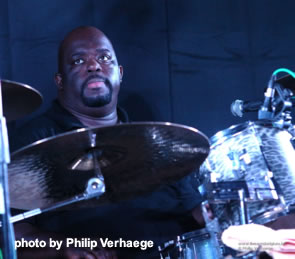