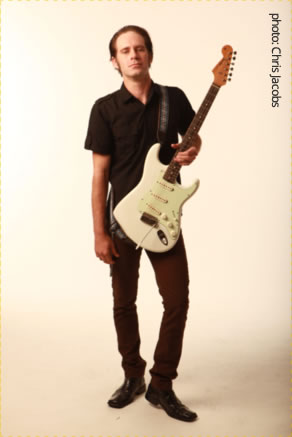 Billy Satterfield was born in the Midwest. From an early age he was surrounded by music. His father – a concert promoter and guitarist – introduced him to many musical styles. Indeed, Billy was enlightened to blues greats such as Mance Libscomb, Lightnin’ Hopkins, or to song writers like Tom Waits, Tim Hardin, as well as to jazz masters like Chet Baker, and Charlie Parker. Furthermore, befriending musicians such as Charlie Musselwhite, John Hammond, Lonnie Mack, and Johnny Clyde Copeland, had an immense impact on his career choice.

He started playing guitar at a young age and soon was considered to be a musical prodigy! He learned many guitar playing styles like the Chicago and Texas approach, delved into Chicago Legend Mike Bloomfield, and even learned how to play … Punk music! To this day, while deeply steeped into Chicago Blues – his first love – Billy continues to push his musical interests and boundaries. However, whatever style he chooses to interpret, Billy remains a delightful and tasty guitar player. On stage he is fiery, passionate and always seeking those “Blue Notes”!