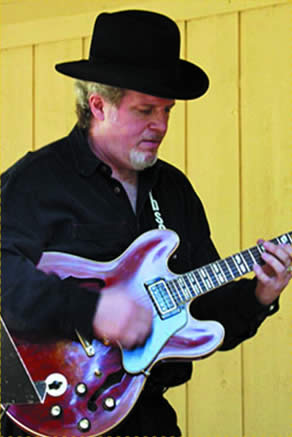 Danny Draher, New York Blues & Jazz Society’s Best Artist Winner- is a guitarist, singer, musical director, consultant and producer. Born in Indianapolis, he heard the fascinating sounds of Wes Montgomery, James Brown, Ray Charles, and Elvis. He started playing piano and bass at a young age, then switched to the guitar and soon moved to Chicago. By age fourteen, Danny was performing at parties with local bands and began his professional life as a guitarist with Otis Rush and Buddy Guy at the Checkerboard Lounge. He recorded his first album with the Bob Reidy Band on Flying Fish Records at the legendary Chess Studios. He left Chicago and toured nationally with many popular,’top 40′, rock, rhythm and blues bands.

He moved to New York City and soon became the guitarist, singer and bandleader of choice. Through his reputation, he and his band have been hired by the who’s who of the music industry. He has recorded and toured nationally and internationally with artists such as Dr. John, Etta James, Paul Butterfield and Allen Toussaint. He was the musical director for the 1992 Rhythm and Blues Foundation Awards with some of the award recipients being Aretha Franklin, Bobby Bland, Sam Moore, The Staples Singers, Rufus and Carla Thomas. The Danny Draher Band performed for the Radio America documentary, The Blues Story, An American Art Form, featuring B.B. King, Ruth Brown and Buddy Guy at the Whitney Museum. He and his band were also in the 1994 first annual VH-1 Awards with BonnieRaitt.

He performed with Buster Poindexter, Bo Diddley and the Uptown Horns at the Palladium for the Democratic Convention party in New York City with President Clinton on sax. Danny played many jazz and blues festivals including “The Montreaux JazzFestival” and “The North Sea Jazz Festival”.

He was the producer for Cephas & Wiggin’s CD, Blues Men, on Chesky Records. He also worked with producer John Snyder as a session guitarist for Polygram and Verve Records and has appeared in several recent releases, including Lucky Peterson’s last two gold CD’s.

This journeyman of multi-faceted talent and passion has mesmerized audiences internationally including Carnegie Hall, Lincoln Center and Madison Square Garden.Danny also appeared on Delmark Records Fifty Year Anniversary Jazz and Blues Collection CD. He has a great reputation within the industry and he is known for his style and finesse. He’s due for a Grammy of his own. Enjoy this CD! Thank you.

——-
Photo and bio taken with permission from www.dannydraher.com