Inetta Visor has blessed MISSISSIPPI HEAT with her voice since 2001. Her powerful, Etta James-like voice on Footprints On The Ceiling, Glad You’re Mine, and One Eye Open with the Heat is a testament to this blessing.

Inetta was born February 4,1955 on the South Side of Chicago. She graduated from Simeon Vocational High School in 1972, and studied electronics at the Omega Institute, and worked as a radio engineer for then Chicago Alderman Roman Pucinski from 1975 to 1983.

Ever since a child, Inetta had always had a passion for singing. It was a rare moment when she was found not singing or humming a song to herself. Her favorites at the time were Rock ‘N Roll tunes by such bands as the Rolling Stones and the Beatles. One day she decided to try out for an audition she heard announced by a WVON radio DJ for Rock ‘N Roll choir DUBBER RUCKlE.

Apparently Inetta was a natural, and she was selected to sing with this choir. She sang her first professional gig with them in 1971, and continued to hone her singing skills on and off the stage whenever she could, as she continued to work as a radio engineer to pay the bills. In 1979 she began to sing with a Rhythm and Blues choir TWT (THE WHOLE TRUTH) founded by a former Dubber Ruckie member.

With TWT Inetta sang throughout the week at various clubs with this 12-piece or more band. Even though some nights she only came back with very little (as low as $15.00!), she gathered great experience on stage.

In 1984, Inetta left TWT and put together her own choir (SISTERS WITH VOICES). Not soon after putting out an ad for her choir, she received a phone call from a man named Marc Pulido interested in her services. Pulido told her he was with a band by the name of SKYLINE, and many of their gigs were on the North Side of Chicago. He offered them to work with him. Every one in Inetta’s group (but herself) refused to participate due to the racial implications of playing on the North Side. Inetta optimistically took this offer and sang back-up until this band disbanded in 1986 (due to difficulties in obtaining a record deal).

Inetta eventually began working at a South Side daycare center, after she left her radio engineer job in 1983. Her goal was to eventually work as a recording engineer, to better pay the bills. But at that time it was difficult for a female to get this type of position. However, out of the blue she got a phone call in 1993 from her former band member acquaintance Marc Pulido. After seven years he had not forgotten her voice. Pulido was now with a band named TAINTED BLUE. She joined that band as a back-up singer, and a few months later was their lead singer. Pulido eventually left TAINTED BLUE to found his own group World Class Noise, a 12 piece group, which Inetta did back-up vocals for as well (she is on 6 of their CDs). She sang with TAINTED BLUE until they broke up in 1997.

Inetta then took work with the Illinois Student Assistance Program (State of Illinois) in 1989 for more stability as she continued to press her musical career. In 2000 she was recommended by longtime acquaintance Theresa Davis to well-established (since 1991) Chicago Blues band MISSISSIPPI HEAT, who already had several CDs out, their most recent being Handyman (2000) winning Best Blues CD of the Year by Real Blues Magazine. Theresa Davis, who had sung for the Emotions, had recommended Inetta, as she herself did not see blues as her musical form, and therefore did not see the Heat as an ideal match for her. MISSISSIPPI HEAT at this point were looking for a replacement for their then singer Katherine Davis leaving the band to promote her new Jazz CD. Inetta auditioned for them at Koko Taylor’s club on Wabash. As it turned out Katherine Davis stayed a while longer than anticipated.
In 2001 Inetta decided to give Michel Lacocque (Pierre’s brother and band manager) a call to offer her services to MISSISSIPPI HEAT once again. Just as she was about to pick up the phone, while looking at the business card, she received a call from no one other than Michel himself! The rest is history.

Since she joined the band, they have recorded three albums and a DVD with Inetta, all of which have received awards. Inetta also won the Best Blues Singer competition at the House Of Blues (Chicago) on July 10, 2003. 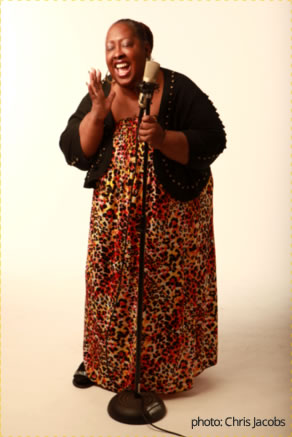