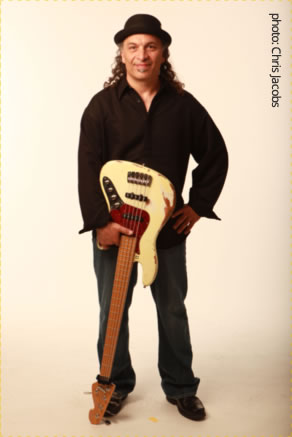 Joseph joined Mississippi Heat in the Summer of 2011. He replaces Stephen “The Kid” Howard who joined the Blue Man’s Group as a Zither player.

Joseph – who lives in the Ann Arbor, MI area – is a world-class bass player, who is as comfortable playing classical music as he is playing Jazz, Funk or Chicago Blues. He is a passionate player, and brings with him years of musical and touring experience. Joseph exhibits an unforgettable, high-energy stage presence and always delivers his signature bottom end grooves that you will feel from head to toes!

As a child Joseph was inspired by jazz, soul and classical recordings that he heard in and around his home. By the tender age of 8 years old he could already read and perform music! With studies at Blue Lake Music Camp and Interlochen National Music Camp as a teenager, Joseph became an outstanding classical upright bassist, earning him positions in both the Michigan Youth Symphony and the Saginaw Symphony respectively.

Joseph continued his education with studies at Wayne State University in Detroit, MI and Jazz studies at the American Conservatory of Music in Chicago, IL. There he also immersed himself in the Chicago music scene, most significantly, the blues scene!

He has performed with blues artists like Matt “Guitar” Murphy, Lucky Peterson, Jason Ricci, Joanne Shaw Taylor, Sherman Robertson, Debra Coleman, and Shawn Kellerman; as well as with the Americana band The Nouveaux Honkies, and top 40 bands such as the Attraction and 5 Guys named Moe.