Kenny Smith was raised in the heart of the Chicago blues scene. While other babies listened to nursery rhymes, Kenny listened to the blues, and the blues in Kenny’s house were played by America’s finest. His father, Willie “Big Eyes” Smith, is one of the best-known living blues drummers. Willie played in Muddy Waters’ band for some 30 years. So, it’s only natural that Kenny would grow up with a drumstick in his hand, and a back beat in his head. Muddy Waters and his band were like family to Kenny. They encouraged his music, and were his mentors.

In a recent article about Kenny’s drumming capabilities Robert Margolin said: “…Kenny … plays in the moment and provides a great drum part in any musical situation. He listens and creates in an instant. Kenny is certainly already one of the best drummers out there. Trust me on that. I’ve been on bandstands with some of the best…and the worst.”

While Kenny acknowledges that his father taught him 99% of what he knows, he has also studied with such great drummers as Odie Payne, Fred Below, Earl Phillips, S. P. Leary, Francis Clay and Art Blakey.

Kenny reports: “I am seriously developing my piano playing and my vocals. The harp is just a hobby, but the drums are my heart and soul. If there comes a time when I feel the blues is dying, I will make a Kenny Smith CD to carry on the tradition, to keep the blues alive. I grew up with the blues all around me, from the very day I was born, so the traditional blues will always be a big part of me. I can play different styles of music but I learned it all from the blues.” 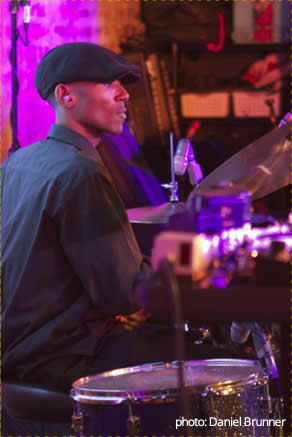