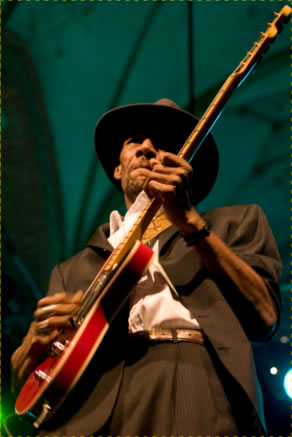 Michael Dotson is a Chicago bluesman, singer songwriter and guitarist. After 10 years of fronting his own bands he has joined forces with Mississippi Heat. He has two cd releases …. the 2006 “Lightnin’ in My Pocket”, and 2010 :A Fork in the Road”. About the new collaboration Michael says. “This band is a good fit for me, they do mostly original material and I’m a song writer, I find it more interesting working in a songwriting culture where you can come up with new stuff and try it out instead of just rehashing the same old songs.”

For years he was a veteran of the Chicago blues scene, playing for three years with Aron Burton and then logging six years as a Teardrop with Magic Slim. “Yeah” Michael remembers. “There was a period when they had my phone number at a few of the blues bars, and they would call me if they were short a guitar player for the night.” He laughs. “That was great, I got to work with lots of different people but I had to get used to missing my favorite tv shows at the last minute. I was always packed and ready to go.”

He also played often with George Baze and Little Mac Simmons. “George was a mentor to me” Michael elaborates. “He was Junior Well’s band leader for 16 years, and he taught me a lot about how to play rhythm, and what really matters in the blues. I remember he told me one time that he was living in New York at the same time Hendrix was there and he’d heard him playing around town and didn’t like the way he played. George said it was weird (how) he only played on the bass strings of the guitar, and it was only after Jimi got famous and he heard the songs that he understood that he had been teaching himself to play the whole guitar.”

He has made regular sideman appearances with Big Time Sarah, Granae Louise, and Liz Mandeville. He worked a number of times for Willie Kent, and then fronted his band The Gents for a year around 2006 after Willie’s passing. Other stage credits include appearances with Big Jack Johnson, Guitar Shorty, Billy Boy Arnold, and Homesick James. “Those were when I was with Aron Burton.” Michael says. “He was another mentor, it was like going to blues university. We did one gig backing Homesick James at the Chicago Bluesfest and I was lost through the whole gig … he was jumping time, not calling out keys … I just felt my way through the set, and when we were done, well the people loved it and it was a spectacular payday.
As Aron handed me my money he must have noticed my dazed and bewildered expression. He said ‘Mike, most of the really good paying gigs…
they’re like that.’”