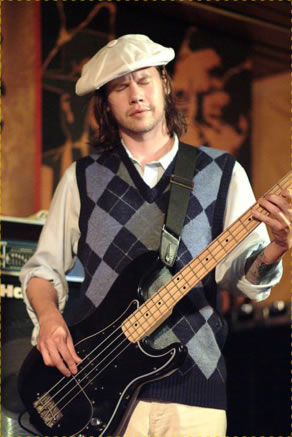 Steve is a musician’s musician: his versatility is impressive as he can play jazz, blues, R&B as well as rock music with equal ease. What distinguishes him from many other bass players is his perfect timing. Steve has an unpretentious playing style that, along with Kenny Smith’s in-the-pocket drumming style, allows the band’s soloists to shine.

Steve picked up the bass at the age of 12. His teacher taught him swing, shuffle and blues bass lines, and threw him early onstage at legendary blues jams in Chicago (Blues on Halsted, Blues Etc. Rosas). By the age of 13, he was being hired to play professionally. His first paying gig was with Tommy McCracken, Mr. Blues and Matt Walker (from the Smashing Pumpkins and Filter) at the Abbey Pub. Too young to get to his jobs alone, he had to be driven there by his parents. By the age of 14, he was gigging most weekends on the Chicago blues scene. As his reputation grew, he began to garner road offers (Byther Smith, Michael Coleman) that would ultimately have to be turned down so he would not miss his high school classes.

While in High School, Steve began refining his jazz skills as well as studying the upright bass in orchestra. His high school jazz band would eventually be recognized as the top high school jazz band in the country by Downbeat Magazine. As a member of this band, he had the opportunity to perform live with such legendary jazz artists as Maynard Ferguston, Eddie Palermo and Christopher Holliday.

Steve went on to study music at the University of Iowa. Playing with the university’s jazz band, the Johnson County Landmark, he was able to study and perform with other legends such as Wynton Marsalis, Joshua Redman, and Brian Blade. Since college, he has dedicated his life to making music. He has toured the U.S. with the critically acclaimed indie band Denali. With his own band Ambulette, he has made records for both the Capitol Records and Astralwerks labels. He has recorded with Anti- recording artist William Elliot Whitmore, and has toured as a guitarist with Geffen recording artists.

In between all of this, Steve has made time to record and do extensive touring with Trailer Records recording artists’ David Zollo and Bo Ramsey (Greg Brown, Lucinda Williams, Todd Snider). As a member of Mississippi Heat, Steve has been able to perform and record with such blues luminaries as Otis Rush, Billy Boy Arnold, Carl Weathersby and Lurrie Bell. Steve Howard is a great addition to the Heat. We’re glad to have “The Kid” back and look forward to a bright future and many more recordings.